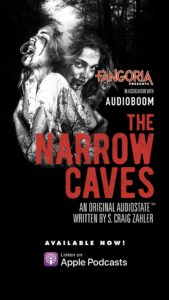 The horror giant Fangoria recently made a triumphant comeback in magazine form, and is continuing its momentum through The Narrow Caves, an eight-episode horror podcast series based upon a script written by the acclaimed novelist, director, and screenwriter, S. Craig Zahler (Puppetmaster: The Littlest Reich, Bone Tomahawk). The product of a partnership between Audioboom and Cinestate, The Narrow Caves acts as the latter company’s first Audiostate™, which Cinestate defines as “a new product combining the grandiosity of Hollywood films with the intimacy of audio to create an ‘ear-movie’ experience.” Below is the official synopsis:

In Florida, 1983, two college students meet at a yard party and do not hit it off. Walter and Ruby have no     reason to reprise this antagonistic encounter, but something strange and almost primordial burgeons     within each of them. Their thoughts and dreams turn toward each other, and in very little time they find     themselves in an intense and unique relationship. What lies at the bottom of their strange connection is     unearthed when Walter joins Ruby on a holiday trip to her home in upstate New York, where a living     darkness inhabits the woodlands that surround her family’s mansion. This engrossing and unpredictable     blend of mystery, horror, and romance subverts the idea of “fated love” while exploring strange     compulsions, intense desires, and ancient mysteries that are best left buried deep in the earth.

The voice talents of The Narrow Caves include Vincent D’Onofrio (Full Metal Jacket, Jurassic World), Will Patton (The Punisher, 2018’s Halloween), Lili Simmons (The Purge TV series, Banshee), and Wyatt Russell (We Are What We Are, At the Devil’s Door); the soundtrack is the creation of the Binary Reptiles. Sponsored by Shudder, all eight episodes of The Narrow Caves are available on Apple Podcasts, iHeart, Stitcher, and Spotify. Check it out, and witness the birth of a new and dynamic horror experience!