Throughout the holiday season, Christmas-themed horror films have splattered both the big and small screens with tinsel, blood, and a dash of entrails. One such film is Elves(2018), in which a series of evil and unearthly elves are released from a cursed chest through a demonic ritual. After a group of friends unwittingly bind themselves to the elves’ murderous Naughty List, they are given a terrifying pair of choices: carry out the wicked deeds assigned to them by the elves, or die.

Although Elves initially offers a solid (if somewhat unoriginal) concept, the film ultimately disappoints. The storyline is shallow and moves quickly, with only basic consideration in terms of developing the characters and establishing the lore within the film. The acting generally comes across as stiff and unnatural, and the kill scenes are too feebly staged to convey building suspense and terror—especially when paired with the awkward and inconsistent special effects, camera angles, and lighting. The various plot points, while generally straightforward, fail to come together gracefully, and often feel convoluted in their execution. A few concepts sprinkled throughout the film have potential, but the respective delivery of each concept never appears to match its intent. Without any sense of sarcasm or malice in this review, the film might have worked as a smart parody of a Christmas horror film if it had been structured differently, and had been infused with a different tone; unfortunately, the film takes itself too seriously for this to be the case.

Overall, Elves fails to find a place in the holiday-themed horror movie canon. 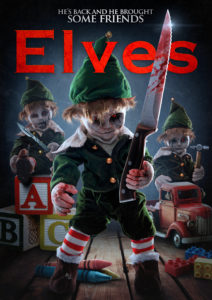