What a difference a single issue makes. When I reviewed the very first issue of Monster Magazine back in August, I was impressed with its content but disappointed by the lack of a compelling cover. Also, I made suggestions for some types of content that might make the magazine more attractive to horror nostalgia audiences. I’m happy to report that Monster Magazine‘s No. 2, its October 2018 issue, is packed with all the types of content from its previous issue plus the types that were missing. It’s also completed the package with a beautiful black-and-white illustration on the front cover and advertising for Nashville Comic & Toy Con on the back.
The latest issue of Monster begins with a nostalgia piece about 1954’s Universal horror movie Creature from the Black Lagoon, and that is immediately followed by a fascinating insider interview with Ricou Browning, the director, actor, producer, writer, and stuntman who played the Gill-man creature in the film. Next up is an interview with Butch Patrick, who most famously played Eddie Munster in the CBS television series The Munsters, but remains active both as an actor and as a presence in the horror nostalgia community at conventions.
The remainder of this issue is a hodgepodge of horror nostalgia featuring reviews of classic toys, films, horror television hosts, and practical special effects. Similar to the previous issue, Vance Capley and company wrap things up with a Capley-illustrated horror comic titled The Creature Undying.
Overall, the second issue of Monster Magazine is a fun romp through the 1950s and 1960s horror pop culture. Even if you didn’t live those decades, you’d most likely enjoy the fresh perspectives on films and television shows that you saw in syndication or as part of a late-night Halloween movie line-up on an independent television station in the 1970s and 1980s.
You can purchase the latest issue of Monster Magazine here. You can buy signed editions here. 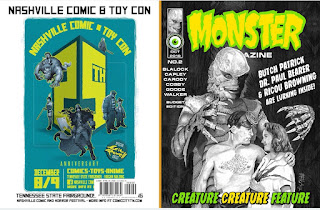