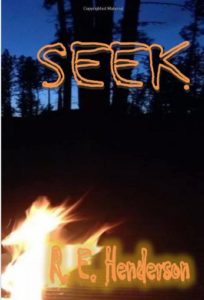 Seek is a Christian horror novella that tells the story of Brody, his fiancé Erin, and their group of friends as they transition from college to the real world.  A tragedy in the past of the small group of friends seemingly comes back to haunt them when they revisit the scene of said tragedy for a cathartic camping trip.
To be completely honest with you, Dear Reader, I was going to take today off to work on some other stuff. I’ve got a pretty full schedule and figured today would be the perfect day to knock some stuff out. However, I woke up this morning to a message from JimJam about a Christian horror novella. I gotta admit, I was intrigued by this. I would even go as far as to say that I was excited. Not because I’m a Christian, but because it was something I had never seen before. There is a ton of horror content out there for the less religiously inclined but outside of exorcisms and demons, there aren’t too many Christian elements in horror, not positive ones anyway.  Having some horror out there for the church crowd to dig on was something I thought was super cool. So, I poured some coffee, got comfortable, and set about reading Seek.
It didn’t take long for my excitement to be burned away like an Old Testament offering. I really don’t know where to start. There were a bunch of subplots that kind of tied together but not really, the characters were hardly developed. The only thing we really get is that Leon is a drunk butthole and doesn’t believe in God, Erin is a super religious sweetheart who is pregnant with her boyfriend’s baby, Isaac has a super dark past that is only hinted at for most of the book, Brody is a dutiful spouse-to-be, and Beth is a lesbian. That’s about it. There aren’t even character descriptions. We know frig all about these characters and it makes it really hard to give a darn about them in the end. The overall narrative is completely muddled. There was a really cool concept there but I feel like it was given up on early in the story.
Okay, so let’s go ahead and talk about the religious aspects of the book. Erin is seen several times reading her bible and singing hymns while doing housework. She talks Brody into going to church when the baby comes. Then, when Isaac reveals his connection to the tragedy they all witnessed. His father killed himself in front of Isaac in the woods while he and his friends were playing hide and seek. She, and the author I guess, decides that this is the time to ask Isaac if he is right with God. Instead of actually comforting her friend who just opened up to her, she decides to talk to him about religion and forgiving his father. Later, when Isaac is about to die, he just accepts his fate. He doesn’t resist, doesn’t try to fight, just lets the killer take him out. Why? Because he has Jesus in his heart and a home in Heaven that is better than this world. So he let an eight month pregnant woman string him up. Because Jesus. I don’t have an issue with the religious themes in the book. I have a problem with how hamfistedly they were shoehorned into an already clunky narrative.
Yes, you read that correctly. Erin, the eight month pregnant woman, was the killer. She ran through the woods, chained Leon up and killed him with a broken whiskey bottle, lifted Beth out of her hiding place and buried her with big heavy rocks; she put a noose around Isaac’s neck and set him to swing, then knocked out, tied up, and killed her fiancé. I’m sorry. I know there’s a level of disbelief that we have to suspend in horror but I just don’t see a pregnant woman, especially one who is about to pop, doing all that. I guess you just have to take it on faith.
My final complaint about this work is the writing itself. It reads like a high school kid’s rough draft. The words “alot”, “allot”, and “a lot” are used interchangeably throughout the book and that’s just the tip of the iceberg. Look, I get that grammar doesn’t have to be perfect when writing fiction (or reviews for that matter) but when the word use, mechanics, and grammar are so bad that it takes you out of the story, it’s a gosh darn problem, by golly!. This book needs a capable and patient editor and a thorough reworking.
The climax of the book is pretty much the only action to be found and it feels more rushed than a romp in the confessional. About ninety percent of this book is a clunky setup to a really lackluster payoff. The kills make no sense, the motive is ridiculous, and there is hardly any descriptive writing. Erin says that she is killing everyone to cleanse their sins before the baby comes. She’s the only really religious character and she turns out to be a crazy zealot with superhuman strength and zero maternal instinct. That kind of muddles the overall message. Like, for a second I thought it was a subversive anti-religious story, honestly.  Thankfully, the epilogue is a bible passage about not judging others which, I guess, makes it make a little bit of sense.
All in all, would I recommend this novella? Golly gee! I sure as heck wouldn’t! This is literally over an hour of my life I will never get back. Find something else to read and leave Seek lost in the woods where it belongs.