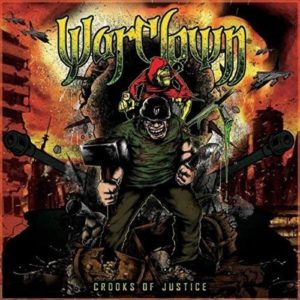 Hey everybody! I really appreciate you stopping by to check out the music reviews. See, I’ve always been of the mind that horror doesn’t stop with movies. My goal here is to get some of the music that I truly enjoy into the ear holes of as many people as I can. Is it all going to be horror punk full of zombies and shit? No. I mean, yeah I’m sure that will come up too but there will be a lot more than that. My only requirement is that it be dark enough to be relevant to our site and our readers. Every review will start by discussing why the album is relevant and maybe some interesting tidbits then I’ll get into the meat of the review. I think it’ll be fun. That being said, let’s get down to it,
This album deals with all manner of real world dark shit. There’s betrayal, war, violence, death, and it starts out with a sample from They Live for fuck’s sake. Also, metal and horror have always been a good match to me. The imagery, the aggression, the communities, and the fact that most people making both horror and metal are just doing it for the love of the game make the two a match made in Hell.
WarClown are from right here in Knoxville and don’t let the name fool you, these dudes are all business. Thery’re more war than clown, I guess you could say. Also, in the spirit of full disclosure I know these dudes, one of the guitarists is a close friend of mine and he brought me a copy of their new album to review which was super cool. That won’t change how I feel about the album though.
It just so happens that this is a solid ass album. If I had to describe WarClown’s sound I would say it is the bastard child of thrash and groove. Big hooky riffs, killer leads, and drums and bass that make you want to mosh with your living room furniture…that might just be me. Whatever. The influences are in plain view but the sound is still original. There is no aping here, just tracks that are, sonically, love letters to the good old days of metal. Crooks of Justice is full of tracks that are sure to move a room but don’t lack in lyrical substance. In fact, let’s take a closer look at some of my favorite tracks on the album. It wasn’t easy to narrow down, but I did it.
Peace Through Superior Firepower:  This one starts with some fairly melodic leads and then you get crushed under a ten ton riff going about ninety miles an hour. Like the Hell Priest himself, this track sinks its hooks in deep and doesn’t let go. There’s a moment to breathe about midway through the song with some deep gravely spoken word reminiscent of Down- era Anselmo and a bass line that was so good I had to rewind the track and hear it again. My gaming chair almost caught an elbow over this song. Yeah, it’s like that.
Hammer and Coin: I was so stoked to see this song on the album. I’ve seen it done live a few times; it’s a crowd favorite that never fails to get the room moving. The riffs are infectious and driving, aggression just fucking oozes out of every note and it all comes together, forms a hand, and grabs you by the balls. The end table was destroyed in a one-man wall of death. It was glorious.
Guilty and Deceived: No pretense, no real build up, it just hits you like a straight right to the throat. Then there’s the breakdown. Holy shit dude. I’m a fan of a good breakdown and this one made my beard grow. This is the final track on the album and I think it might be my favorite. It closes out the album really well and leaves you with that buzz that you feel when silence replaces the organized sonic chaos that was once there. I’m currently typing this from the kitchen table because at about the three minute mark my desk lost its life to a good hard shove.
If you dig some good groove injected with thrash and some originality go pick up Crooks of Justice. Make sure you lift with your legs though, because this one is fucking heavy. You can get a physical or digital copy here and while you wait on your copy to come in you can check the album out on Spotify. Go check out their Facebook page and see if you can catch them live, you won’t regret it.